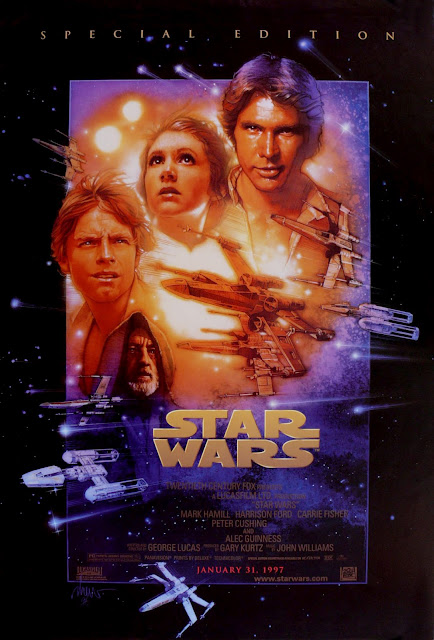 Happy Life Day everyone! This is a blog post I’ve been meaning to write for a while, so I figured it would be a great way to get back into the spirit of writing recreationally. This will be the first in a series called “Movie Pros and Cons” and in this entry I’ll be looking not at a movie itself, but some movie alterations. Yep, I’m gonna check out the Star Wars Special Editions, more specifically the blu-ray editions. I want to really dig into what was good and bad about these changes, because I (unlike most SW fans) don’t hate the Special Editions. I just hate parts of the Special Editions. Let’s look at what parts made it better, what parts made it worse and what parts are completely inconsequential to the overall quality of the film. This will be the first of a three part series dissecting the Star Wars Special Editions. I won’t be looking at every tiny change, but I’ll take a look at the bigger, more discussed ones and talk about some things that weren’t changed, but should have been. Let’s begin.

Change #2: Making the dewbacks move
Verdict: Pro
Explanation: It makes the film more dynamic to have dewbacks that actually move and growl.

Change #3: Adding more stormtroopers and weird floaty droids to the Tattooine landing party
Verdict: Con
Explanation: I have a hard time believing the Empire would dispatch little more than a small battalion to a planet as remote as Tattooine and I hate those little floaty droids. They’re everywhere and they look stupid.

Change #4: Removing the “blob” under Luke’s landspeeder.
Verdict: Pro
Explanation: Making an actual floating landspeeder was impossible to achieve in 1977, so removing the Vaseline smear under the landspeeder that hides its wheels is a perfectly legit change.

Change #5: The new backgrounds and establishing shots
Verdict: On-the-fence
Explanation: There are too many examples of this to list them all separately, so I’m grouping them all together. There’s the new shot of Ben’s hut, the digitally altered establishing shots on Tattooine and Yavin, etc. Basically you could keep the original versions of these shots and it would be fine, but the new versions are nice too as they add things like moving clouds and space-ships taking off. Some of it looks nice, but some of it seems unnecessary, so I’m staying on the fence with this one.

Change #7: Adding rocks in front of R2
Verdict: On-the-fence
Explanation: This is a change that gets a lot of flack too, because people can only ask themselves why it was even made. I still can’t answer that question. It’s completely pointless, but it doesn’t really take away from the film either. It’s just pointless, so I’m gonna throw it on the fence pile.

Change #8: Mos Eisley
Verdict: Con
Explanation: I’m a stickler when it comes to cannon and it bothers me how some of the old creatures and droids from the original version have been removed in favour of creatures that weren’t there originally. I’d rather the special editions take what was already there and make it better, not replace it with anything else. Also, it’s WAY too busy and CGIey. This is a back-water planet no one cares about, not the bustling centre of the universe. It makes no sense to add all these creatures and characters.

Change #9: Changing wolf-man guy to frog guy/ elephant guy
Verdict: Con
Explanation: This goes back to what I said in my last entry. Lucas apparently changed this because the wolf-man guy was too scary for young kids. Honestly, no kid is that easily frightened and if they are they shouldn’t watch Star Wars. It contains things like…

Change they didn’t make #1: Panda Baba’s bloody, severed arm
Explanation: In the cantina after Obi-wan chops Panda Baba’s arm off, it suddenly changes from a flipper to a claw, his sleeve goes about 4 inches lower and he’s bleeding where a lightsaber should codorize the wound. The special edition was the perfect place to replace this shot with one that fixes all these mistakes, but noooooo, we gotta make changes like…

Change #11: The Jabba scene
Verdict: Pro
Explanation: I know a lot of people would put this in the con pile, but I list it as a pro for a few reasons. First off, this scene was the #1 draw to the special editions and the main reason they even happened in the first place. Lucas always wanted it and it does explain Han’s situation more clearly and tie this film a little better to Jedi. On top of that, it’s a fun little scene and I feel it actually adds to the film’s pacing a bit. Sure CGI Jabba looks dumb now, even the updated 2004 version, but I still like this scene. I love how Boba Fett’s in there and I actually think it’s funny when Han steps on Jabba’s tail. It’s very in keeping with his character. I know lots of people are against this scene, but screw you! This is my list, bitch.

Change #12: The Falcon takes off
Verdict: On-the-fence
Explanation: There’s a new shot of the falcon taking off from Mos Eisley. It’s nice, but again, I could take it or leave it.

Change #13: The Praxis Effect
Verdict: On-the-fence
Explanation: Adding a big ring to the explosions of Alderaan and the Death Star makes them look a little fancier, but ultimately adds nothing. I’m gonna group this one in with all those altered backgrounds. It looks nice, but I could take it or leave it.

Change #14: Censoring the storm-trooper deaths
Verdict: Con
Explanation: This goes with Greedo shooting first and erasing wolf-man guy in Lucas’s attempt to make the movie more G-rated and it’s pointless and dumb, because he censors some of the deaths, but not all of them and these movies don’t need censoring.

Change #15: All the ADR alterations:
Verdict: On-the-fence
Explanation: I love some of the ADR changes like how 3PO explains the death star reactor and how you hear the guy say “Close the blast doors,” before saying “Open the blast doors!” but some of the ADR changes are unnecessary or just don’t add anything, so I’m throwing this one on the fence too. Some good, some bad.

Change #17: The Dianoga
Verdict: Pro
Explanation: I like how it blinks now and looks more realistic.

Change #18: Storm-Trooper battalion
Verdict: Pro
Explanation: This is the scene where Han is running down the hall and in the original runs into two or three storm-troopers, but here he runs into a whole battalion waiting for him. The new version is hilarious and really makes the scene. If I had to pick a favourite change in this movie, it would be this. I love it.

Change #19: CGI lightsabers
Verdict: On-the-fence
Explanation: The original lightsabers looked fine, but I guess these ones are crisper and prettier. Again, much like the backgrounds and Praxis Effect, I could take it or leave it.

Change #20: The Biggs Scene
Verdict: Pro
Explanation: Lucas decided to add back in a scene of Luke meeting Biggs before boarding his X-Wing. It’s a nice scene that humanizes Luke a little and makes you feel a little bad when Biggs dies near the end. I’m not sure why it was cut to begin with.

Change #21: CGI ships
Verdict: Con
Explanation: Just like the lightsabers, there’s no real need to redo the incredible model photography during the epic final Death Star battle with CGI. Seeing the pilot’s heads move inside the ships is nice, but replacing the ships entirely takes away from the hard work ILM put into making this scene work way back in ’77.

Change they didn’t make # 2: CGI computer screens
Explanation: Why they never did this is beyond me, but redoing all the old computer screens like the ones in the Falcon, the X-Wing targeting computers and the Death Star schematic to bring them all up to date and make them look more fancy and less cheesy would have been a change I could actually get behind. Those computer effects look terrible by today’s standards, but once again, they missed their chance in favour of more unnecessary changes.

Alright, that’s it for this entry. Stay tuned for part 2, the much shorter entry on The Empire Strikes Back!

Previous Movie Pros and Cons: Return of the Jedi
Next Last exit to Ponyville Episode 6-Eye on Equestria