TWiG Crew May 7, 2012 Blogs, Double D Does the Movies Leave a comment 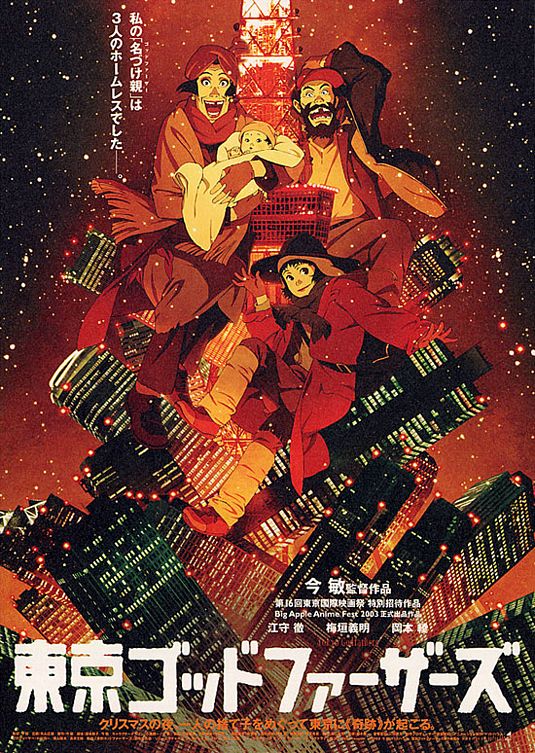 Here’s the next movie on my top 25, #22 – Tokyo Godfathers. This is the first of two anime films on the list (you’ll find out what the other one is much later) and stands here to basically represent my love of Satoshi Kon, may he rest in peace. The man was a legend and his legacy will live on long after his death through people like me who remember his works as the little pieces of genius that they are. I have to admit Millennium Actress was pretty damn close to making this list too, and I could easily write a whole article on that film as well and how it almost made me cry (OK, so it did make me cry), but since Tokyo Godfathers is my favourite Kon film, I figured it was the one most worthy of making this list.

I once did a classic anime minute for This Week in Geek about Tokyo Godfathers, so this isn’t the first time I’ve talked about how much I adore this film. The first thing most people will notice when watching this movie is just how little it actually feels like an anime. When most people think of Japanese Animation the first thing that comes to their minds is a giant robot fighting a tentacled monster. You know, that or other things involving tentacled monsters, but Tokyo Godfathers isn’t like that. The remarkable thing about most of Kon’s films is how easily they could have been made into live action films. There’s really no reason for a movie like Tokyo Godfathers to be animated, because there’s nothing here they couldn’t have done with some actors and a camera. There are no big special effects, no crazy dream sequences or teenagers getting super-powers or motorcycles that can turn into helicopters or anything crazy like that. Tokyo Godfathers is a film about people, plain and simple. It’s a movie that examines the heart and soul inside each of us.

So, you might be asking yourself why this movie is animated then, if it doesn’t need to be. Well, first off, the animation in Tokyo Godfathers is incredible. Kon’s team capture the emotion on a characters face when they’re faced with a near-death experience just as well as they capture the comedic timing of someone falling off of a bike. Nothing feels cartoony. It feels like real life that happens to be animated. In fact you might even forget you’re watching an animated film after a while. This brings me to the next reason why this film is animated instead of live action. I think Satoshi Kon wanted to prove here that animated films, Japanese anime especially, could accomplish great story-telling without the need to make something other-worldly or ridiculous. In that sense I sincerely hope that Tokyo Godfathers, as well as all of Kon’s other work obviously, will leave a lasting impact on not only the Japanese animation industry, but the animation industry as a whole. You don’t need to use animation to make super-heroes and talking rabbits. Sometimes just telling a simple human story is enough. Though I guess I should mention that the dancing buildings during the end credits would be difficult to achieve using live-action, but that’s beside the point.

I guess most of you who are unfamiliar with the film are probably wondering what the hell it’s even about at this point. No, Tokyo Godfathers is not a mob film set in Japan as its title might suggest. It’s actually the story of three homeless people, a middle-aged man named Gin, a transvestite named Hana and a teenager named Miyuki who discover an abandoned baby on Christmas Eve. Together they embark on a quest to return the infant back to its mother, and learn to change a few diapers along the way. The three unlikely heroes go through all sorts of little misadventures together as we learn little bits about each of their lives and the events that led to each of them becoming homeless. It’s a touching, humanistic story about the ties that bind people together and ultimately, much like Die Hard, my last film on the list, it’s an awesome Christmas movie as it explores what makes the season of giving worthwhile for people with nothing to give or gain.

Obviously I have nothing but praise for this film and I have little left to say except to go out and find a copy and buy it and watch it. Even if you don’t like anime, as long as you like a good movie, you’ll like Tokyo Godfathers, so go ahead and give it a chance. I even showed this film once to my friend Will, who isn’t a really big anime fan and even he thought it was great. Keep in mind that there is not English dub for this film, so you’ll have to read subtitles, but it’s worth it. Trust me. It’ll make you laugh. It’ll make you cry and it’ll make you think. Tokyo Godfathers is an incredible reminder of what it means to be a human being in a world filled with love and hate and that’s why it’s #22 on my top 25!