Hey, Double D here for another review of the classic games you know and love and blah blah blah, let’s cut the shit and get to the review! Alright, so here’s the scenario. You’re on a rescue mission to save a fellow US Marine who has dropped into enemy territory during a second civil war that has ravaged the United States once more. You discover your comrade being held captive by enemy forces next to the old remains of the Mississippi Delta and the only escape is to float down the river. Your only flotation device – a couple of spare inner tubes that you swiped from the enemy camp. Now you have to paddle your way down the river using nothing but your bare hands, escaping the deadly alligators that the enemy has trained to kill all who defy them and avoid the deadly traps they’ve set throughout the river.

At least I’m pretty sure that’s what Toobin’ is about. That’s the premise I made up anyways. You can make up your own. In reality the game is a race to reach the finish line as you toob your way through famous rivers across the Earth and beyond, including the Amazon, Okeefenokee Swamp, the Nile, the River Styx and the canals of Mars! Fucking Mars! They were running out of ideas at that point. Seriously though, how did they wind up tubing down the River Styx? 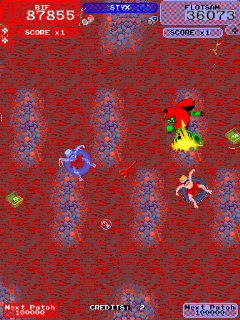 Anyways, despite making no fucking sense whatsoever and not even knowing how to spell its own name, Toobin’ is a surprisingly fun game. Basically the player has to hit buttons that correspond with your arms and legs on different sides of the tube in order to steer it, much like one might attempt to steer a tube in a raging river in real life.

The game follows Bif and Jet (no, I didn’t make those names up) as they tube their way around the world in an attempt to uh, tube their way around the world, I guess. Do they need a reason? Along their journey they find weapons in the form of cans of beer which you can throw at your opponent and anything else that gets in the way of your high score and collect points in the form of hidden treasure and the letters that spell the made-up word “toobin”. Watch out though, alligators, spear-chucking natives and random pieces of wood threaten to pop your tube at every turn! You know, like in real life. The last time I went to a water park was a fucking nightmare. Those angry natives won’t leave you alone!

Toobin’ was released as an arcade cabinet in 1988 by Atari and was later ported to PC, NES and even Game Boy Color. It wasn’t a huge success upon release, but later became a cult classic among fans that enjoyed the idea of a game that didn’t revolve around shooting aliens and instead took an obscure leisure activity and made it a hundred times more dangerous than it actually is. 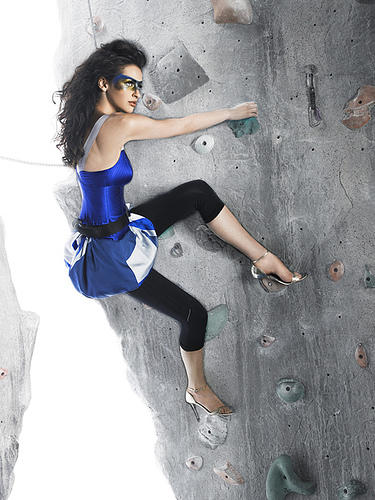 From the makers of Toobin’, Resident Evil: Indoor Rock Climbin’!

I can’t blame the people who gravitated toward a game like this though. Personally, I’m attracted to anything that goes against the norm and Toobin’ definitely fits that bill. It’s not your average arcade game, but it also happens to be ridiculously fun and addictive. If you get the chance, check out this marvellous little gem. It’s available on Midway Arcade Treasures for PS2 and X-Box or Arcade Party Pack for PS1, which is a lot cheaper and probably easier to find. However, if you can find the original arcade cabinet somewhere, even better!

This is not one to be forgotten, even though I’m sure a lot of people have forgotten it already. But those who love Toobin’ will never forget, especially the part where you travel down Nightmare River. Spoooookyyy!

Previous Future Imperfect – Episode 05 – Starships of Trek
Next Blog X: The Cabin in the Woods Review